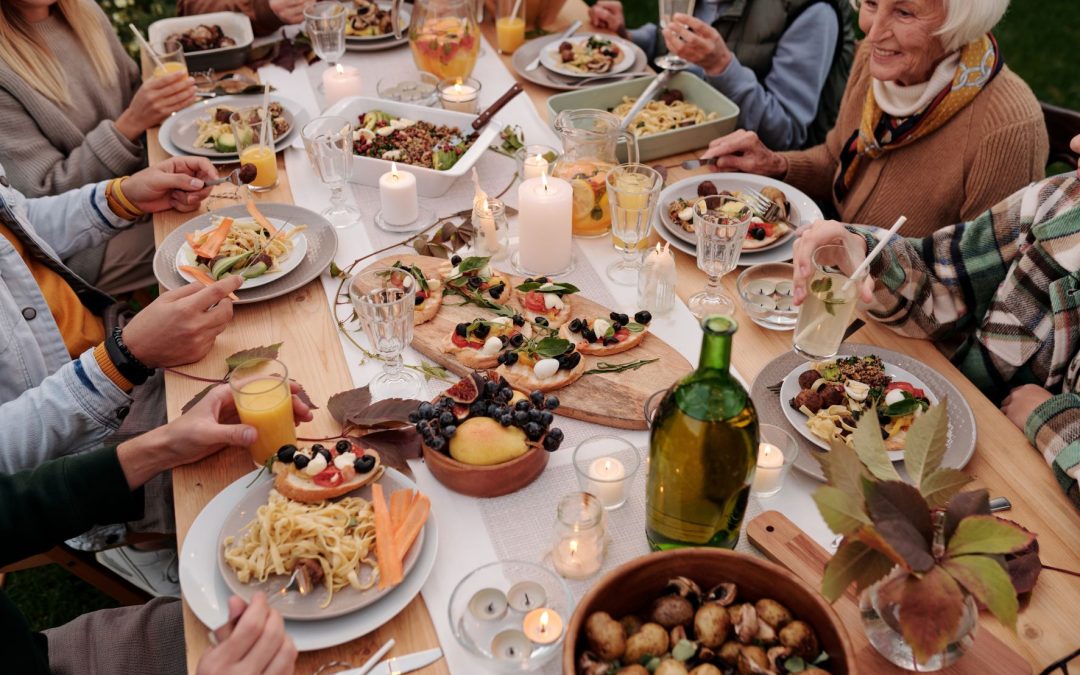 Every culture has family traditions and recipes which extend for many generations. In my book Generations of Good Food, I follow six generations of my mother’s Italian family. Most of the traditional food recipes are tied to holidays.

As a kid, I remember the weeks leading up to Palm Sunday and Easter Sunday being a whirlwind of activity in the kitchen. My mother and her sisters would gather at different houses and bake. Sweet Easter Bread on page 93. The recipe routinely draws comments like “seriously, who bakes with 8 pounds of flour, a pound of butter, and a dozen eggs?” But that recipe makes eight big loaves of bread or a million dinner rolls which would feed many families. It can be halved into four loaves which is manageable. The Italian Ricotta Cheese Pie on page 87 isn’t a pie at all. This is generally on Holy Saturday to be fresh for Easter brunch. The sweet variation is baked in an 8 x 8 square pie made with ricotta cheese, eggs, and sugar in a light pastry crust. The combination of eggs and cheese makes a layer of sweet, rich custard. The other variation is to combine the ricotta and eggs with cooked sausage and (optional) bits of ham to make a savory dish. Finally, what would Easter be without the Bunny Cake found on page 132!!

My mother would make 10-12 of these each year – sending them out the door to grandkids and young neighborhood kids.

A single box cake makes two, and she would frost them with a mountain of marshmallow frosting. My mother never made a lamb cake, but one of her sisters always had one on the table with Mom’s bunny cake for dessert options.

Other Easter traditions include:

In Bermuda, they make kites of different shapes and sizes; most are hexagonal or octagonal and use a cross-part of the structure. There are several categories to compete in, including Best Traditional Bermuda Kite, Most Innovative Design, and more. The story goes that a local Sunday school teacher explaining Christ’s ascension launched a kite that looked like Jesus to help the students understand, and the tradition was born. Throughout the weekend, they also eat codfish and traditional hot cross buns. And on Easter Sunday, Bermudians attend sunrise services held on different beaches across the island.

In Australia, they make chocolate bilbies (rabbits) for Easter, according to HuffPost, with proceeds benefiting the endangered animals.

Young children in Finland — especially girls — traditionally dress up as Easter witches, wearing colorful clothing with painted freckles on their cheeks. On Palm Sunday in Eastern Finland and Holy Saturday in Western Finland, the little witches go door-to-door with bunches of willow twigs decorated with colorful feathers and crepe paper. A rhyming blessing is recited to drive away evil spirits, and the children are often given a chocolate egg in return.

On the morning of Holy Saturday, the traditional “pot throwing” takes place on the Greek island of Corfu. People throw pots, pans, and other earthenware often filled with water out of their windows, smashing them on the street. Some say the custom derives from the Venetians, who used to throw out all of their old items on New Year’s Day. Others believe the throwing of the pots welcomes spring, symbolizing the new crops that will be gathered in the new pots.

In Poland, pouring water on one another is an Easter tradition called Śmigus-dyngus, a.k.a. Wet Monday. On Easter Monday, people try to drench each other with buckets of water, squirt guns, or anything they can get their hands on. Legend says girls who get soaked on Wet Monday will marry within the year.

The Philippines is a primarily Catholic country, so it makes sense that its inhabitants take Easter very seriously. Each year on Good Friday, a few people in San Pedro Cutud in the northern Philippines are nailed to crosses to honor Jesus’ crucifixion. Though the Catholic Church has frowned upon these practices, it’s an annual tradition that brings in thousands of tourists.

Across Mexico, most of the more elaborate Semana Santa (Holy Week) celebrations include dramatic reenactments of the capture, trial, and crucifixion of Jesus. It’s considered a great honor to take part in the productions.

So wherever your family tree originated, you will find an Easter tradition in food or activity. Happy Easter.