Pandemic Caregiving, Whose Stealing from Grandma? 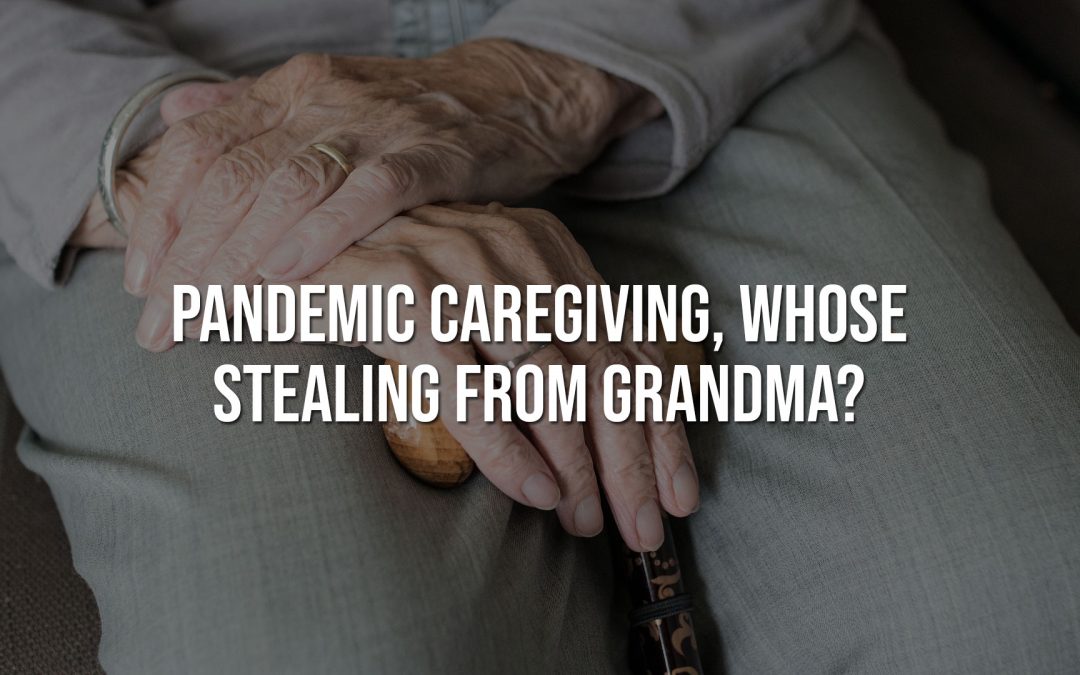 Many families suddenly found themselves to be caregivers to elderly loved ones during the pandemic. Some by choice and others because they understood a lockdown meant there would be no contact with their loved ones. The choice caused chaos in many households which had no idea what to anticipate as caregivers. But moreover, the choice provided an opportunity for some caregivers to become greedy and abusive. While Covid-19 restrictions appear to be relaxing and families may have adjusted to the role of caregivers, the occurrences of reported elder abuse have become another epidemic.

There is a simple term for elder abuse or negative caregiving. That term is “stealing from grandma.” The elderly frequently are targets of scam artists and thieves, particularly if they have dementia or are in frail health. In my book, One Caregiver’s Journey, I discuss my mother’s sister as being the poster child of a scam magnet. In the final couple of years of her life my aunt was scammed by a defunct funeral home, insurance company and her neighbor’s daughter. To free her from the scams I was forced to hire a lawyer in one instance and threaten legal action in the others. The most difficult was when my cousin and I discovered a neighbor’s daughter was stealing from our aunt. Our aunt loved and trusted this young lady and her little daughter which should have been our red flag. Because of our aunt’s frail health and poor eyesight, she was an easy target for wrongdoing. For several months prior to moving our aunt from an independent senior housing complex to assisted living we were aware something was not right. Frequently our aunt complained of not having money and we started to notice jewelry, money and even cans of coffee missing in her apartment. One morning we were sitting in the apartment discussing the upcoming move when the young lady let herself in with a key that had been missing for some time. In packing our aunt’s belongings, we discovered several pieces of old, expensive jewelry and coins from a collection were missing. Our aunt was a smoker who generally bought cigarettes once a month. We found her checkbook and wallet tossed in a closet. The checking account reflected many checks without our aunt’s signature were written to the local cigarette store. During the move we discovered many important documents had been thrown under the bed. Although we were unable to catch the woman in the act, we did contact her and threaten full prosecution under the law should we have tangible evidence of her theft. We alerted the complex management who changed the locks on the door as we moved, yes it was too little too late.

A negative side to caregiving is that elderly people are attractive targets for abuse and theft. Many have dementia or other health issues which prevent them from realizing they are the target of theft. My late mother never wanted a stranger to be left in our house alone with her. She would say if they roamed through the house, she could not follow them with her walker to ensure they weren’t rifling through drawers. She was right. Scam artists are nothing new and we constantly tell our loved ones not to give out their personal information over the phone, but no one expects those who know and love grandma to steal from her.

While our aunt was a target for anything that was not nailed down, most scammers look for easy money. The definition of scamming an elder person is overt or covert taking of money. Generally, persons who are familiar with an elder person, such as family or friends, will resort to forging an old person’s signature, using property, or taking possessions with permission. Too frequently this is done without the elder person’s knowledge and trust. And too frequently it is done without the knowledge of other relatives.  Another deceptive tactic is to get the elder person to sign a document, such as a will or bank document, through coercion, deception or under influence. Some family scammers promise lifelong care in exchange for money – then do not hold their end of the bargain as the bank account is drained. The most frequent document that is exploited is a Power of Attorney.

The global pandemic has been an opportunity for increasing elder abuse through financial scams. Who are the perpetrators? Documents and statistics of senior entities and AARP indicate that children, grandchildren, and relatives are the people who most frequently steal from grandma. Why? Why would family steal from their loved ones? Documents reflect many people have an addiction to feed or they are impatient for their inheritance to come to them legally. The pandemic resulted in financial burdens on many families who simultaneously were caregivers to an elder relative. Deception of an elder relative is an attractive alternative for people with financial problems or legal issues of their own that need fixing. Stealing from grandma helps alleviate financial burdens for families having difficulties making ends meet.

Often other family members do not realize thefts have occurred until after the relative has become deceased. For many it takes years of court battles and the expenditure of hundreds of dollars on attorney fees to right the wrong. If we can learn anything from pandemic theft of elder relatives it is to be aware of the warning signs by not allowing one individual have full reign over finances. Those signs include:

*  Bank accounts reflect withdrawing of significant amounts of money or significant expenditures that cannot be explained.

* A change in the amount of cash being withdrawn from an account.

* The appearance of previously uninvolved relatives or “close friends” acting in an unusually friendly manner.

* Increased need for money when caregivers are gainfully employed while caregiving.

Although it is easy to do, families should not allow one relative to have full reign over financial matters of an elder relative. This is particularly true if the relative is living in their home. The name of another relative (not the caregiver) should be listed on a checking account. This person can access the records to assess finances. It is imperative that each sibling of the caregiver has a copy of the Last Will and Testament. This will alleviate the opportunity to change the documents. Take all the necessary precautions to avoid an unchecked opportunity for anyone to steal from grandma.